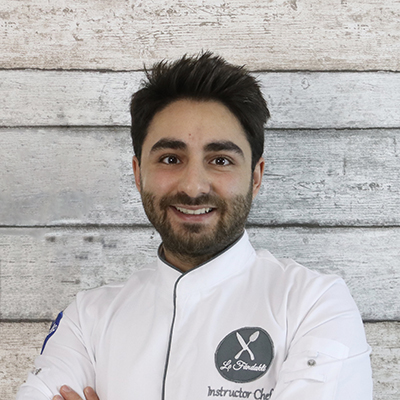 Born in 1987 in Kadikoy township of Istanbul, gained interest in culinary arts and decided to be a chef after completing the college of business and leaving his family company.
He studied Chef & Owner in Culinary Arts Academy in 2008 and thus he officially entered the culinary world.
He has worked in several well known institutions such as The Marmara Hotel, Vogue Restaurant, Ajia Hotel, Cercis Murat Mansion.
He visited the United States of America in 2010 and studied ESL (English as a Second Language) at Lincoln Land Community College in Springfield, Illinois. During his English training, he also worked as a hands-on observer at The Hilton of Springfield, Flavor of India, Xochimilco Mexican Restaurant, Hunan Chinese Restaurant, at intervals between 2011 to 2015. He observed the societies affected heavily from obesity so he decided to turn his focus on healthy diet.
As of 2015 he started working as a chef instructor at Wow Hotel Soffa Kitchen Workshop. He further developed this kitchen and authored a 9- step starter and a 6-step advanced cooking course books and gave workshops about international culinary arts.
In 2015 he developed his own web page and brand (www.lefandakli.com), at the same time he got training in professional culinary photography.  Also in 2015 he met with Buse Terim and started blogging at www.buseterim.com.tr.
In 2016 he turned his interest in rare inborn metabolic diseases such as phenylketonuria (PKU) and some others, and started studying special food options for such diseases with Nestle Health Sciences. He became one of the very few PKU Chefs in the world.
In 2016 he was awarded the 4th place in IKA Food Olympics in Germany, representing Turkey.
In 2017 during his summer vacation in USA, he also got further training about sea food in Boiling Crab Restaurant.
He continues to work on ketogenic recipes in conjunction with dietitians.  His work was broadcasted during the holy month of Ramadan on national TV channel TGRT News as well as for Bilgi University, and other cooking TV shows such as “Mutfakta Ne var?”, “Mutfak Insanlari”.
He continues to works as a menu consultant and business coach for many restaurants and cafes.
He left WOW Hotel in 2018 and started working as research and development chef at Gursoy Hazelnut company, Tatika Tatlandirici, Adali Efe Olive Oil company and, Unilever Cornetto.
As of 2018 he has been working on low protein diet at Nestle Health Science for Turkey market and markets of various countries. Apart from this, he works on advertising and marketing, along with introducing new recipes on social media.

All speakers
Time and date

09/05/2019 12:00 09/05/2019 12:30 Using Rice in Professional Kitchens with Chef Emrah Fandaklı Chef Emrah Fandaklı will teach us how to use rice in different recipes and prepare rice with different cooking methods. We invite all kitchen professionals to learn the recipes for the “fried vegetable rice” and “jumbo shrimp with fried sweet and sour sauce and rice” prepared by Chef Emrah for the show, get tips and also get a taste of these dishes. Food Arena Show Kitchen, Hall 10
Venue