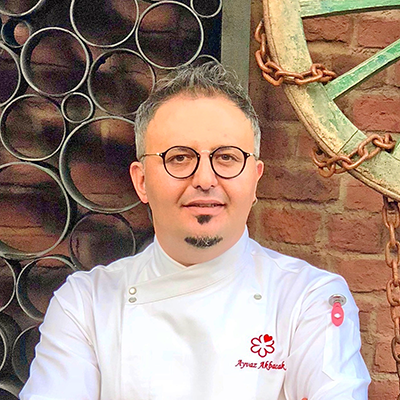 Mr. Akbacak had started his professional career in 1992 as a chef assistant in a restaurant.  He respectively served in all departments. He serves as Executive Chef in various restaurants and hotels. He is aware that the distinctive tastes of different cultures are different and with his unique works he is looking for extraordinary tastes and local ones. He had opportunity to work with leading foreign chefs with his research for world cuisine. He conducted various special courses and researches upon finding such researches inadequate. Upon discovery of his works, he started working in visual media for the last ten years and he participated in various food programs on multiple channels within Turkey.

His works has been subjected to news various times and he is the food journalist of various magazines at the same time. For the last eight years, he is conducting his work with Dr. Ender Saraç by looking at the healthy eating and human health with the eye of the kitchen and he was the first one in Turkey that crates a food book project along with a medical doctor.  He also has served as a jury in many international competitions and win various awards. He further took part in various associations and federations in the name of cookery. He worked as consultant for various restaurants and hotels and he further worked in menu and concept studies for such businesses. He represented Turkey in IKA World Olympics in 2012 which is organized in Germany and held once in every four years with the participation of the best chefs in the world and he has awarded in third and fourth place. He is also a world class jury member with the WACS affiliated degree and as a education volunteer he provides lectures to the new generation chefs who are studying gastronomy for the innovations in Turkish and world cuisine.

"Discovery Of New Tastes With Guest Products In Turkish Cuisine"